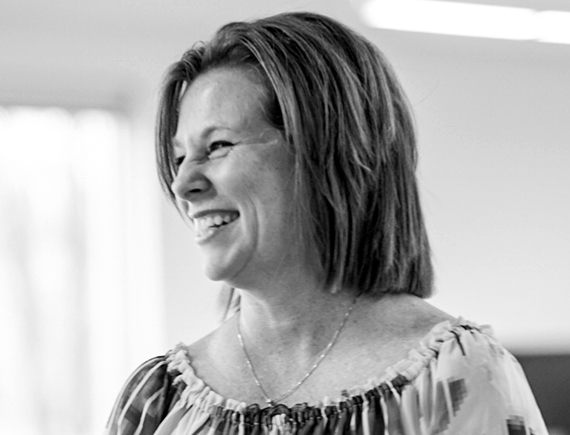 Renee Fischer is a St. Louis native with a degree from Maryville University. She had a few jobs before Color Art but this is where she has been for more than 20 years. She started as a contract designer for Edward Jones but became a permanent staff member at the earliest opportunity. When the previous Director of Design was leaving, she recommended Renee as her replacement and she’s been here ever since! Renee and her team of more than eight support the sales team by helping customers visualize and understand what they’re getting.

If she ever were to win a Grammy, Renee would thank her parents, Heinz and Inge, her husband John and two boys, Jesse and Dominic for always being there and for their continuous support in all her efforts.

AM What’s your favorite thing about Color Art?
RF The people, honestly. Everyone truly cares about each other, sticks up for each other, has fun together and I think because of that, people stay or eventually come back.

AM Are you thinking of a time in particular?
RF As a contract employee, generally people don’t know who you are, but one of the things I always remember is that every time I came into THIS building the CEO would greet me by name and ask how things were going. It always surprised me and I found it impressive that he would take the time to get to know someone that didn’t work in the same building.

AM Secret talents / claims to fame?
RF Secret talents that I can talk about? Um, I think the one thing that I enjoy doing is making cards. I get together with my sisters and my cousins and… we make cards! I make all my Christmas cards, thank you cards, birthday cards… AM How big is your Christmas card list?! RF 50ish AM How long does it take you to make 50 cards? RF The hardest part is coming up with the idea but once you have that you can kind of make an assembly line and do it quickly.

AM If you didn’t sleep, what would you do with your extra time?
RF Oh my gash. I’d probably organize. I’m a very organized person but I need more time to weed out the stuff I don’t need in order to become MORE organized. I can tell you where everything is but, I just need to get rid of the old stuff.

AM Would you rather get a Grammy or an Oscar?
RF I think I’d much rather be a singer because I love that you can have music pretty much anywhere. A movie is good for a little while but you have to just sit there and watch it whereas music you can take anywhere.

AM Tell me about growing up.
RF My parents were born and raised in Germany and immigrated here so I am first generation American. I have two sisters and I’m in the middle.
AM What’s your maiden name? RF Hainke (pronounced hine-keh) but of course here they pronounce it “hankie” so hanky panky, hankerchief blah blah blah. The nicknames were terrible.

AM Do you remember your first pet and its name?
RF My first pet, excluding fish because we don’t really count those, was a German Shepard mixed breed puppy named Smoky. We’d always wanted a German Shepard but fish were the only things we were allowed to have so when we got our first dog it was a big deal.

AM Are there any jobs you feel like you’d be really terrible at?
RF Technology! Not my forte. Hook this up, make this connection… Uh… noooo.

AM Pineapple on pizza, yes or no?
RF No but I’ll take it in Chinese!

RENEES FAVORITES
Sports Teams Cardinals
Superhero Wonder Woman
Movie I have a few but one of them would have to be A Knights Tale. It had modern songs like Meatloaf mixed with old time settings. I just thought it was funny.
Holiday Christmas
Dessert Crème Brulee
St. Louis Destination Chandler Hill Winery