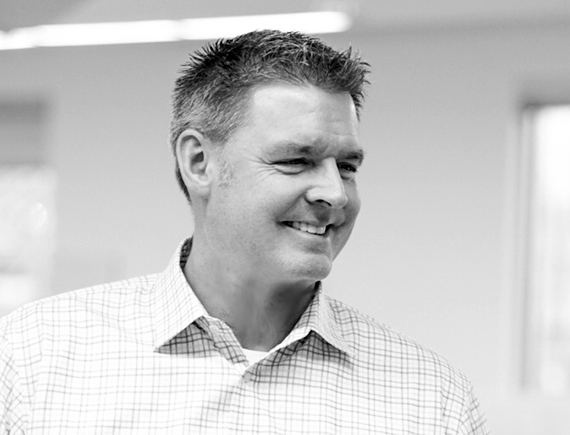 Jim was a Mighty Cadet here at our very own Christian Brothers College High School and went on to attend the University of Central Missouri where he received a Bachelor of Science degree. Jim got into the audiovisual business in 1997.

JS This was my intro to computers; my first laptop was as big as a truck and the “portable” projectors we sold were about 30 pounds and cost $10,000. The industry has really changed since then.

Over the next four years, Jim opened offices in both St. Louis and Boise but decided to break out on his own in 2001. He and two business partners moved back to St. Louis and started what is now known as Color Art Technology (formerly Innovative Technolgy Group).

JS Color Art was actually a client of ours in St Louis and I got to know the CEO and told him that we could offer technology solutions as a part of the portfolio. I’ll never forget coming to the office on a Saturday morning and presenting the business plan. Joe didn’t hesitate, right on the spot, he said “Let’s do it. Let’s go for it.” So we funded the company, started the business in 2001 and now we’re about to celebrate our 17th anniversary.

AF What’s your favorite thing about Color Art?
JS I love that even though we are a medium / large corporation, it still feels small, like a family. I like the values on which the company was founded and I think the leadership is second to none.

AF What’s your favorite thing about your job?
JS I love seeing other people become successful. I love when members of the Sales Team achieve their goals, I love seeing the Engineers design something super creative, I love watching Project Managers complete projects without a hitch. And it trickles down, I love seeing someone put their kid through college and knowing we had a part of that.

AF Are there any jobs you’d feel like you’d be really terrible at?
JS Oh, I know my limitations. (laughs) You don’t want me in the field. When I first got into the business, we wore a lot of hats. We had to design it, install it, service it, and sell it. We had to do it all and it was horrible! When I started this company I wanted everyone to be an expert in their role and I learned our Engineers and Project Managers are so much more detailed than I am.

AF Any secret talents, claims to fame?
JS I am an avid scuba diver. I have dove all over the Caribbean. There’s such a sense of freedom. Sometimes I’d rather be under the water than above it. We’re definitely guests under the water (laughs) AF Any close calls? JS No. Diving’s all about safety so you always have an individual buddy and you’re technically always with a group. I’ve seen sharks, I’ve seen eels, a 6-foot barracuda, manta rays, eagle rays, turtles… AF What’s the deepest you’ve gone or rather, how do you gauge success as a scuba diver? JS (laughs) I consider it a success if I don’t drown! The deepest I’ve gone is 110 ft below sea level. AF Is that a lot? JS Yeah. The max you can do with my certification is 120 feet so I was at almost at my max. I dove a 280 ft mail ship that split in half off the coast of Peter Island, British Virgin Islands, the propeller was longer than me! It was a cool experience. AF How many times would you say that you’ve gone? JS In the past 17 plus years I’ve probably gone 15 times.

AF What’s your favorite movie?
JS Jaws.
AF (shocked) and you still choose to dive into the ocean?! JS It was one of the first movies I remember my mom and dad taking me to when it came out. I was 6 and it was awesome.

AF What is something you think everyone should do at least once?
JS Well. I’m obviously an adrenaline junky so I would say, everyone needs to do something that they fear, just once, to try and break that fear.

AF Do you remember the name and the type of your first pet?
JS My first pet was a Dalmatian named, Bud. He was the son of one of the original the Anheuser Bush Dalmatians from the commercials. My dad brought him home as a puppy.

AF What is something you’ve done that most people haven’t heard of?
JS Well, I’m not sure many people would know that I grew up playing hockey. I played juniors in town and won two state championships at CBC so that was cool. That and I’ve hit a hole in one.