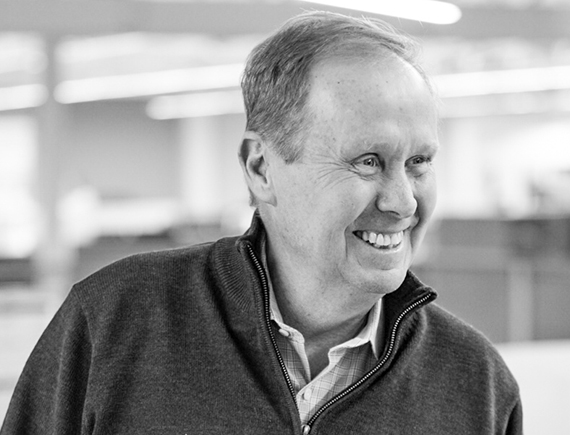 Gary was born and raised in a Catholic family in Milwaukee, Wisconsin. He attended Marquette University where – in addition to playing golf for the University – earned a Bachelor of Science in Business Administration. For a short time after graduation, Gary played golf professionally but ultimately decided to join his college sweetheart (now wife), Mary, in St. Louis. He got a job with Service Bureau Company (a division of IBM) and worked for 7 years selling time-sharing services (similar to today’s Cloud). During that time, Gary earned his MBA in Finance from St. Louis University. Gary joined Color Art in 1985 and says, “It was kind of interesting. There was a book out called, In Search of Excellence, and I loved it – read it cover-to-cover. When I interviewed with Joe (the CEO at the time) I went home and told Mary, “I think I found one of those In Search for Excellence companies,” and became very excited about a career at Color Art.”

Gary was hired as a Sales Manager for New Business Development, was promoted to leadership for the entire sales team, was named President of the Furniture group and GM I’m terrible at this, but I think I was named CEO 6 years ago but, I don’t even know that. (laughs)

AM What’s your favorite thing about Color Art?
GM Well it’s hard to get past the people. The people here are the best. The quality and what I see them do for each other is inspiring. They are interested in their coworkers’ happiness and success and will go the extra mile with a smile on their face so, people are clearly number one and whatever’s two is a distant second.

AM If you were ever to receive an imaginary award, what award would you like to receive?
GM I think the award that would be most satisfying would be Husband and Father of the Year. That would really be important to me. My family is first in my life and always will be. AM Who would you thank and or mention in your acceptance speech? GM Well, my mom and my dad instilled in me values that I carry to this day: building trust, integrity and doing what you say you’re gonna do so I would thank them and then I would thank Mary for being who she is and my kids, Caitlin and Kelly, for everything they’ve meant to us over the years.

AM Is there a real award you’d like to receive?
GM Well. That is an interesting question. Sports have been a big part of my life so I would like to be acknowledged for success on the golf course
AM (< nongolfer) Is there an award for that? GM Oh yeah. There are a bunch of awards and all of them are directly connected to your accomplishments in the field. AM Would your acceptance speech stay the same? GM Well… I don’t know if Mary would get a lot of thanks in that one… (laughs)

AM Any secret talents?
GM I have really good hand-eye coordination, I can juggle. The rest of me is not particularly skilled but the connection between my brain and my hands is pretty darn good. AM Does that mean you play video games? GM No. Not a gamer. Other than the days of video game Pong (dating myself), I’ve never played.

AM If you didn’t sleep what would you do with the extra time?
GM If I had a lot of time on my hands I’d see a lot more plays, musicals, entertainers… I love the energy.

AM Any jobs you feel like you’d be terrible at?
GM I would be a terrible engineer. I studied it my freshman year of college and quickly came to realize that, even though my father was an engineer, I am not built to sit at a desk and do whatever engineers do.

AM Do you remember the name and type of your first pet?
GM Yeah! It was a Guinea pig and its name was Gunga Gin. AM Could you spell that for the record? GM No I can’t spell it for the record (laughs) Our inspiration came from the story of Gunga Din this guy who is irrepressible and unstoppable and our Guinea pig was too so – we named him Gunga Gin (laughs)

AM What’s the best way to start your day
GM I don’t get enough but I like starting my day with exercise. I like to take a spin class and feel like I’ve accomplished something. It gets the day off to a good start.

AM Pineapple on your pizza, yes or no?
GM No. Mushrooms and black olives.

GARY’S FAVORITES
Movie (sigh) I like La La Land
Sports Teams Marquette Warriors, Golden Eagles, followed closely by Green Bay Packers
Super Hero Green Lantern
Holiday For the longest time it was Fourth of July because we always hosted a party at our house but now I think I like Christmas best.
St. Louis Destination SteelWheels. AM Really?! GM I love Steel Wheels. I LOVE Steel Wheels! AM You would tell visitors from out of town to go there? GM: Exactly right, I would.

AM If you were on death row, what would be your last meal?
GM Well it would be two things. I’d probably want a filet from Sydney Street Café with sautéed mushrooms and some asparagus and if my wife were still speaking to me because I’m on death row (laughs) I’d like Mary to be there with me.

AM Any final thoughts for the internet-at-large?
GM I wish people understood what a great company Color Art is. We do things that generate innovation and inspire teams – they really owe it to themselves to come see what we can do.

AM Very good. Well done. You’re not bleeding at all.
GM Didn’t hurt a single bit.